Time to Think About Your Dryer Vents 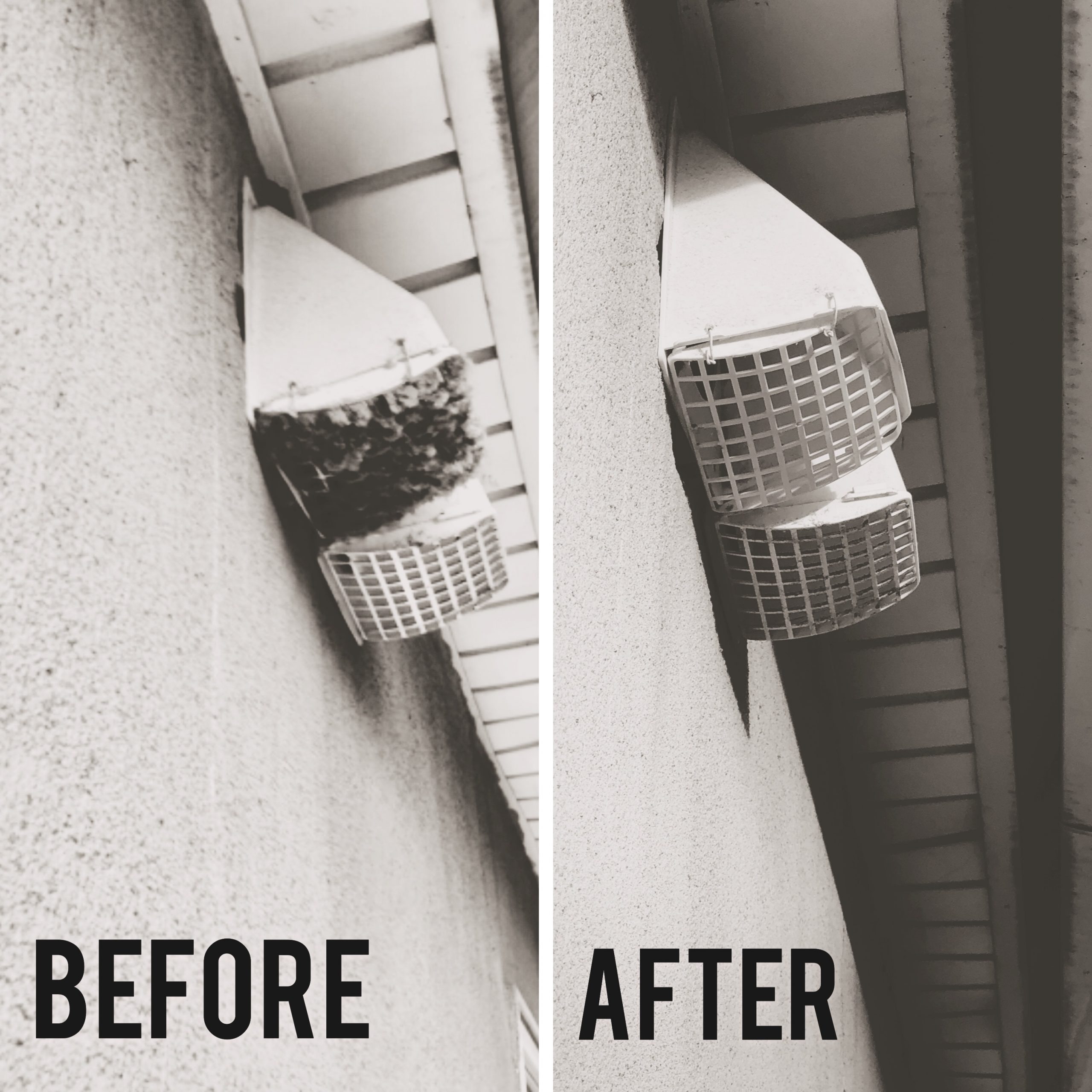 over the cabinetry and tilework in our homes. But do we ever even think about our dryer vents? Prob ably not.

At best, we hope they’re functioning properly down in the laundry room, drying endless loads of laundry. At worst, we’re like, ‘What’s a dryer vent? And why should I even care?’ Here’s why.

According to the National Fire Protection Association, dryers cause 2,900 fires each year, this translates into about $35 million dollars in property loss, as well as injuries and occasionally, death. Are you paying attention yet?

The leading cause of dryer fires is lint, which accumulates naturally when you use the dryer but can sometimes make its way into the appliance’s heating element. When that overheats and the hot air doesn’t circulate properly, you have a problem.

Now here’s the good news. You don’t have to worry about your dryer if you call VentRight. VentRight was started by four bright and ambitious people who live in Inwood and decided to open a business together because they care about the welfare of the community. “We started this business,” says Rivka, one of the founders of VentRight, “because a friend of ours lost his house to a dryer fire and we realized that there’s a tremendous lack of knowledge about basic home safety and maintenance out there.”

And it’s not just about fires. “Even a partially clogged dryer vent,” says Rivka, “slows down the drying time and wastes time and money.” Are dryer vent fires common? “Unfortunately they are,” says Rivka. “Just two weeks ago a vent fire occurred in the Five Towns and last week there was an incident in Brooklyn.”

There’s a simple solution. Call VentRight and make an appointment. They will be happy to come down to your home and clean out your dryer vents so that this doesn’t happen in your own home. Rivka walks us through the process. “Our technicians will visit your home on the designated day and inspect your dryer to make sure that it’s up to code. Then they will check the airflow with a piece of equipment called an anemometer and clean the vent/shaft that extends from the back of the dryer to the wall and continues outdoors. They use special equipment and are professionally trained.” Rivka points out that the homeowner should be on premises during the process.

You don’t have to be a homeowner to benefit from VentRight’s services. Anybody who uses a washer and dryer, including tenants and renters (and even laundromat owners), needs to have their dryers serviced at least once a year. “The Fire Safety Administration recommends an annual cleaning for a family that does about five loads a week,” says Rivka. “But of course, larger families in our community do many more loads than that. And don’t forget the summer bungalow, where the loads of towels and linen just never end.”

VentRight in fact maintains bi-annual contracts with some customers and offers special prices to groups. “We go upstate in the summer and service many bungalow colonies,” says Rivka. “Or we will come down to a Lakewood development and service several homes.”

VentRight will clean the laundry room after they’re done and will leave a magnet on your appliance with a reminder of when you’re due for the next service. “We also call our customers about a month before they need to reschedule a service,” says Rivka.

If you think you can clean your vents on your own, think again. Rivka advises caution. “It’s risky,” she says. “Proper equipment, training, and know-how are essential to cleaning a dryer vent thoroughly and safely.”

Specifically, Rivka cautions homeowners never to use duct tape on their dryer vents. As the dryer vent heats the duct tape, the adhesive on the tape breaks down and the vents will come apart. In general, it’s never a good idea to use anything flammable on your dryer vent. Yes, duct tape is flammable…. Who knew?

“A big chunk of what we do,” Rivka says, “is fixing other people’s mistakes.”

Over the years, the VentRight crew has made all kinds of interesting discoveries.  “We found birds’ nests numerous times,” says Rivka, “and managed to save the birds and the eggs. We’ve also discovered a dead squirrel on one occasion after the homeowner complained about a foul smell whenever she used the dryer.” VentRight installs special bird guards over the traditional vent covers to prevent this from happening again.

We asked Rivka for some advice on how to maintain a clean and efficient laundry room in between visits from VentRight. “Always clean the lint trap after every load,” she says. “And if you’ve had any construction work done in your laundry room, make sure the dryer is connected properly afterwards.”

As a general rule, says Rivka, people should never leave the house when the dryer is on. And certainly, they shouldn’t leave the dryer going when they’re sleeping.

Like everybody at VentRight, Rivka is passionate about her work. “I love my job,” she says. “I love educating people on how to keep their homes safe, and I love the positive feedback we get from our satisfied customers.”

VentRight’s staff is super busy. With multiple crews on the road and thousands of successful cleanings all over the tri-state area, that’s a lot of dryers. VentRight also offers HVAC cleaning services and will inspect your washing machine hoses and offer an upgrade if necessary. “Rubber water hoses could potentially develop bubbles and burst, resulting in major flooding. We can offer an upgrade to stainless steel braided hoses.”

With so many families building magnificent homes with state-of-the-art appliances one would think that VentRight’s services aren’t even necessary. Not so, says Rivka. After more than four years servicing the community, she’s seen it all.

“Most contractors don’t understand the codes and build the vent without a thought for maintenance,” Rivka explains. “I’ve seen gorgeous homes with brand new laundry rooms where the contractor forgot to vent the dryer properly. The lint was accumulating indoors in the home’s attic.” Luckily, VentRight was able to re-route the dryer vents properly and tragedy was averted. In another case, someone built a brand-new bungalow upstate but neglected to unblock the dryer vent, allowing lint to steadily accumulate. In that case, the contractor was called back to correct the issue. All in all, regular maintenance will keep your dryer efficient, saving time and money as well as preventing damage to the dryer, or worse, a fire.

We are creatures of habit, and we expect everything in our homes to run properly and efficiently. Until it doesn’t. Then, when the plumbing breaks down or the freezer shuts off, we feel frustrated and helpless. Finally, VentRight is offering a service that will prevent a disaster from happening. It’s simple, it’s quick, and it’s relatively inexpensive.

Call them today and begin the process of responsible homeownership now.